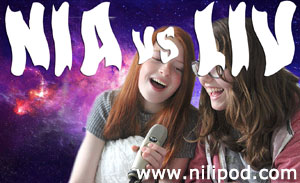 A little in the style of Ant vs Dec and slightly inspired by those two famous Geordie boys, we compete with each other every week in a series of different games challenges, competitions and quizzes.

We know nothing about these beforehand, nothing whatsoever, honestly, so we cannot prepare in any way (not that it would help much anyway).

We thought it might be a nice idea to include these silly games on our website, in case anyone would ever like to have a go at playing them for fun.

We hope that you enjoyed listening to us compete and let us know if you have a go at any of these yourselves. Try not to be too competitive though (not like us!), it just for fun and that's the most important thing when playing a game.

Funny Justin Bieber Quotes Game - Who doesn't love a bit of Justin Bieber at the moment, he's certainly in demand, but he doesn't half say some funny things though! So, we've collected up some of his funniest quotes and mixed them up with some daft things that young children have said, but can you work out who said what? Was is Bieber or a Belieber, is it Just-In or Just-Out?! You get the idea, so play along with us.

More Celebrity Rhyme Time - This great game is back again by popular demand, but with the option of clues this time, to make it all the more fun for everyone. But what is Mary Berry's Bake-Off buddy watching, what part of Kenye West is very hairy, and who is giving Zoella a great big cuddle? Your guess is as good as ours!

Celebrity Rhyming Game - Based on the epic Matt Edmondson game on BBC Radio 1, this is a really fun quiz where the celebrity name has to rhyme with what they are actually doing, like Zoella putting up an umbrealla and stuff like that. You'll soon get the idea when you play along with us.

Celebrity Big Brother Quiz - This week, the ratings have gone mad for Celebrity Big Brother, but are they Celebrities or Nobodies, A-Listers or Z-Listers, Famous Beings or Has Beens? Nia reads out the latest contestants and Liv decides, but be warned, she's a harsh judge.

Christmas Quiz - Questions and Answers - A great traditional game that you can play at home with all of the family, this Christmas quiz is very entertaining and it even features some buzzers that shout out 'Nia' and 'Liv' when they are pressed.

The YouTuber 'Backwards and Forwards' Game - This involves taking it in turns to answer some YouTuber and YouTube related questions. How many male and female YouTubers can you name, what is currently to sale on the Dan and Phil shop website, and what's been trending this week? Any ideas?

The 'Star Wars' or 'Star Warsn't' Game - Whether or not you love the Star Wars films, you'll enjoy playing along with this game, guessing whether or not the characters are real, or if they have been completely made up.

Christmas 'No Teeth' Game - This festive game involves saying things to do with Christmas while covering up your teeth and gums with your lips, and there's a timer involved for added pressure.

Am I a Celebrity in the Jungle - This is 'just for fun', with Nia testing Liv on her celebrity knowledge, but how many of the celebrities holidaying with Ant and Dec in the Australian jungle will she actually have heard of?

Elastic Bands on the Head - The Great Laggy Band Challenge, where basically it's how many elastic bands you can put on your head in just a minute, trying to make funny faces with them at the same time.

Feeling in the Dark - Introducing the rather amazing FeelyPOD, where we had to put our hands inside some boxes to feel what is inside. Liv did not enjoy the creepiness of this challenge.

James Bond Quiz - The 'Not Quite Right Quiz', where a wrong answer is actually the right answer. And as it was on our James Bond special, all of the questions are 007 related, kind of, rather loosely.

Children's Food Quiz - Can you recognise what these strange names for food are? All of these really are what young children have called food items.