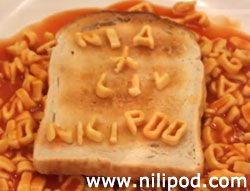 These really are the funny and sometimes rather confusing names that children have called types of food.

You simply have to say what you think the food is.

The answers are shown in brackets after the 'food'. So why not play with a friend and let us know how many you were able to guess yourselves. Some are much harder than others, that's for sure, but they're all really real.