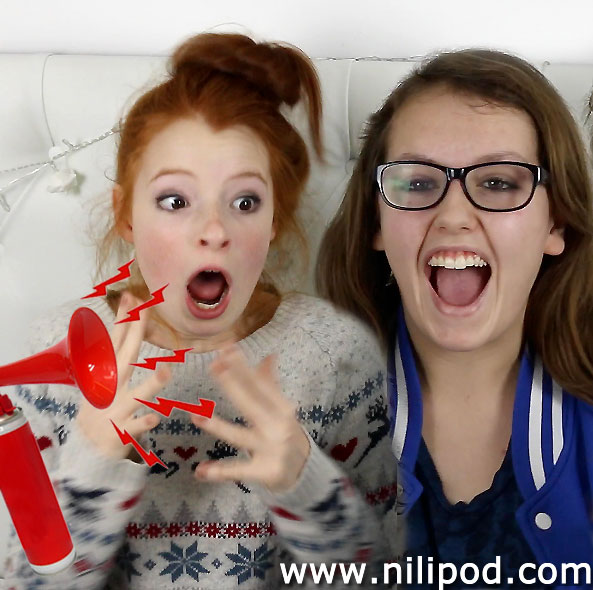 As this week's podcast is a YouTuber special, this Nia vs Liv is all about YouTubers and YouTube itself. It is called 'The Backwards Forwards Game'.

Nia will read out a question that has multiple answers and then you will take it in turns to give an answer, going backwards and forwards. For each answer that you get correct, you will get one point. If you get the answer wrong, or repeat an answer that is already been said, you won't get a point. Your first answer must be accepted. After you've each answered the number of times required), you can move onto the next question. You have ten seconds to answer. If you get ten questions correct, you will score a bonus of five points.

But hang on a minute, there is a twist. In the envelope are some Dan and Phil masks, bought from their online danandphilshop. As you play the game, listen out for the air horn. If you hear this noise, that means the round is over and you must stop what you are doing, put your Dan or Phil mask on and clap your hands once in the air. The first one to do this will score a bonus of two points.

Take it in turns to name a popular male YouTuber vlogger who has gained fame from their videos, including their nickname if you can. You get ten answers each.


Take it in turns to name a popular female YouTuber vlogger who has gained fame from their videos. There are certainly less girl YouTubers, so you get five answers each.

For another bonus two points, can you name a YouTube video that has been trending in the top 60 this week? Here's a clue, some of these are new, some are quite old, and you've talked about some on the podcast before. This is a really tricky one, so you only have five goes each.

Take it in turns to name things that are currently for sale on the danandphilshop website. You get ten answers each, and try to be fairly specific with your guesses.

You both love Dan and Phil, but can you name any famous Dans, Dannys, Daniels, Phils or Phillips? These can be real people or fictional characters. You get five goes each.