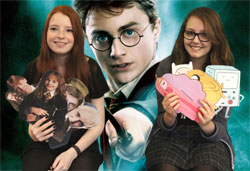 After all the fun that you've had last week with the elastic bands and the week before with the Feely Pod, we thought that you would like another physical challenge this week. In a minute we will be bringing a paddling pool into your bedroom, so that you can have a go at the ice bucket challenge.

Only joking. That would be crazy. Instead, it is a Harry Potter game, but because Liv doesn't know much about the boy wizard and his sorcerer chums, her round will be all about Adventure Time.

You have a large envelope each - do not open it yet. Nia has some characters from Adventure Time and Liv, you have cardboard cut-outs from Harry Potter. You have to describe the characters one by one, holding them up to the camera so that your YouTube viewers can see them.

However, you cannot say any part of their name or what it rhymes with. For example, if you were describing Paul Hollywood, you might say things like Silver Fox on Bake Off with Mary Berry, Spikey Gel Hair, Hunky Chunky Baker, etc But you must not say 'Paul' or rhymes with 'Bollywood'.

You can keep guessing again and again until they get it right . However, if the describer accidentally says the character's name, you will have to move onto the next one. If you get stuck describing, you can move on and come back to the character later on in your round, if you have time.

You have been provided with a timer and the challenge will last one minute per round. For each name that the blindfolded person correctly guesses, the describer will get one point.

Right then. Liv, you've called heads so you are going to be first at guessing. Put on the blindfold. Nia, you can now open your envelope and get ready to start the timer. Don't forget to hold them up to face the camera as you play the game.