Not Quite Right Quiz 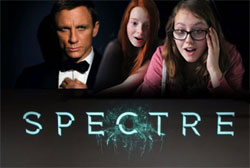 This is where we ask each other questions and you have to give a wrong answer that is almost right. For example, if I asked the question:

You might say 'Pepsi' or 'the sky as your wrong answer, but you can't just say 'Sausage' or 'A brick wall', because that would be just stupid.

And you mustn't repeat the same answer twice, or use any part of the question as your answer.

James Bond often drives an Aston Martin, which is a type of what? [CAR]

Adele famously performed the theme tune Skyfall. What is Adele most famous for? [SINGING]

The film Octopussy features an 8-legged creature in a fish tank. What is this creature? [OCTOPUS]

Auric Goldfinger is a wealthy banker who deals in what type of precious metal? [GOLD]

Tomorrow Never Dies is about what day? [TOMORROW]

In Casino Royale, where do they play roulette. In the... [CASINO]

What part of the body is in the title For Your Eyes Only? [EYES]

Tina Turner sang the theme tune for Golden Eye. She is most famous for dancing around the stage and showing of her long pair of what?

One of the most dramatic James Bond theme tunes is Live and Let Die by Paul McCartney, who was once a singer in which famous band with John Lennon? [THE BEATLES]

007 enjoys a Martini that is 'Shaken not stirred'. Martini is a type of what? [DRINK]

Bond is very good at using his gun. What does he use it for? [SHOOT PEOPLE]

Q is the famous crazy gizmo making scientist who likes to make James what? [GADGETS]

Ian Fleming is the author of the James Bond novels, which are all, what? [BOOKS]

To watch Spectre, people will often eat popcorn when they go to the, where? [CINEMA]

Sexy Bond Girls, such as Pussy Galore and Plenty O'Toole, are usually played by an actress that is not a man, they are a? [WOMAN]

Daniel Craig is a famous actor, but Craig David is a famous, what? [SINGER / POPSTAR]

Ian Fleming also wrote 'Chitty Chitty Bang Bang', which is about a flying what? [CAR]