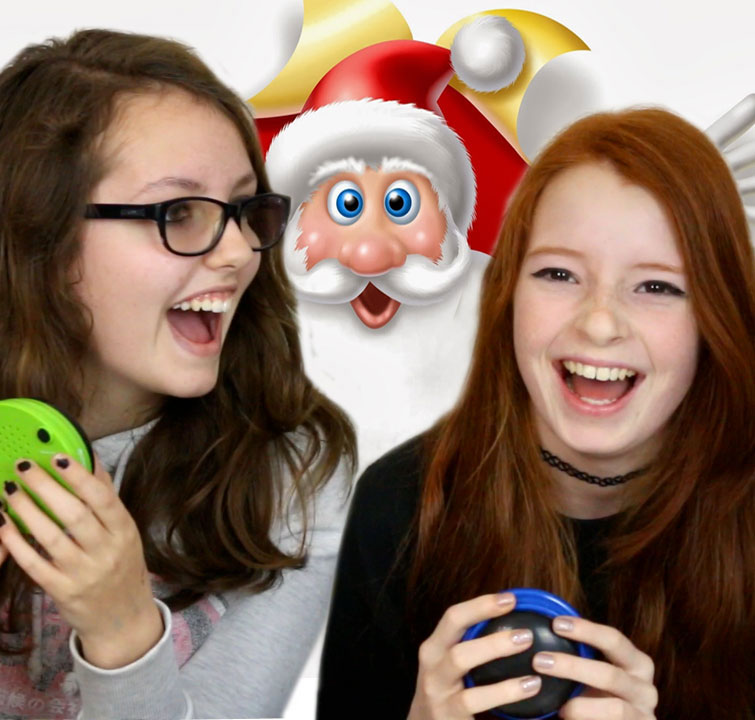 This week's nia vs Liv is a good old-fashioned Christmas quiz with some fantastic questions that we've spent all week researching for you both. @niasmum is going to be the question master hidden behind the camera, because she's a bit shy.

[From the Script]... You can now open the present that Santa left you both. You'll need it for the quiz, and it is not the Dan and Phil face masks again, or the air horn.

These are your very own custom buzzers. Press the green and blue buzzers to see who they belong to. Buzz in when you know the answer to the Christmas questions.

And it is the one with the most points that wins the game, simple. So far, Liv has won the first round, and it is currently 2 - 1 to Liv, so all to play for.

What country do Christmas Trees originate from?
Germany

On 'One foggy Christmas Eve', Santa came to say what?
Rudolph with your nose so bright, won't you guide my sleigh tonight

Who was tiny in Charles Dicken's Christmas Carol?
Tiny Tim of course.

How many of Santa's reindeer start with the letter 'D'?
Three - Dasher, Dancer and Donner

Name two of the burglar traps that Kevin sets in the Home Alone movie.
Oil and nails in the stairs, glass Christmas tree baubles by the window, toy cars on the floor, red-hot door handles, swinging tins of paint

What is the most popular Christmas song ever?
Band Aid

What is the second-most popular Christmas song ever?
I'm Dreaming of a White Christmas

What is the second line of 'I'm Dreaming of a White Christmas'?
Just like the ones I used to know

What is the most popular thing that people on the top of their Christmas tree?
An angel, not a star

What two words are normally pre-printed on gift tags?
To and From

What Christmas image does McDonald's put on its paper bags at this time of the year?
Christmas trees

What was Scrooge's first name?
Ebeneezer

What Christmas carol mentions a figgy pudding?
We Wish You a Merry Christmas

What did my true love send to me on the fifth day of Christmas?
Five gold rings

Who sang 'Let it Go' as Elsa in the Disney movie Frozen?
It was Idina Menzel in the film, and Demi Lovato sang the single version.

Complete this verse from the classic Pogues Christmas song, The Fairytale of New York:
The boys of the NYPD choir, Still singing 'Galway Bay'
And the bells are ringing out for Christmas day

What name is given to small chipolata sausages that have been wrapped in bacon for Christmas dinner?
Pigs in blankets

How many turkeys are purchased is the UK each year at Christmas? Is it approximately: 1 million, 10 million, or 20 million?
10 million

Which kind of tree did the partridge sit in, according to the famous song, 'On The First Day Of Christmas?'
A pear tree

What is Santa Claus called in the country of France?
Père Noël

In the Jingle Bells song, what kind of a sleigh is it?
A one-horse open sleigh

Which Christmas carol tells us that 'The cattle are lowing'?
Away in a Manger

Which one of Santa's reindeer is named after the mythical god of love?
Cupid

In cockney rhyming slang, what do Londoners call their 'eyes'?
Mince pies

What is Aladdin's mother called in pantomimes?
Widow Twankey

What colour are mistletoe berries?
White

What was the Christmas film called that starred Arnold Schwarzenegger?
Jingle all the Way

In the popular rhyme 'Christmas is Coming', who is it that is getting fat?
The goose or geese

Which X-Factor singer released a Christmas song that was called 'One More Sleep'?
Lovely Leona Lewis

Where is the red and white costume of Santa Claus thought to have come from?
A Coca Cola advertisement

Which spirit is used to make a sauce for Christmas pudding?
Brandy

Who is thought to have stolen Christmas?
The Grinch

What was Rudolph's punishment for having a red nose?
He could not join in any reindeer games

After green and red, what are the two most poplar colours at Christmas time?
Gold and silver

How does Good King Wenceslas like his pizzas?
Deep pan, crisp and even