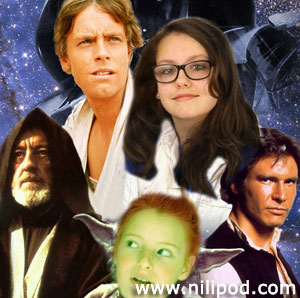 As you've probably guessed already, this week's Nia vs Liv is all about Star Wars. You will be given some individual cards with the names of Star Wars characters, and all you have to do is decide whether they have been in any of the films, or not.

So, basically, a true or false, yes or no, real or not real, game.

But hang on a minute. You didn't think it would be that simple did you?! You each have to decide whether or not these are real characters, but when you answer you must only say:
STAR WARS (like Star Was) or
STAR WARSN'T (like Star Wasn't)

If you say TRUE or FALSE, you will not only miss that round, but you will get a point deducted

And if you say YES or NO as your answer, you will also miss that round and have a point deducted.

Right then Nia, let's start the game. This sounds tricky.

NIA READS OUT THE 'QUESTIONS'

LIV READS OUT THE 'ANSWERS'

General Sneakious - An underhand Kaleesh warlord who suffered from depression.
STAR WARSN'T - No, that is not true. You're thinking of General Grievous. He was created by George Lucas for the film Revenge of the Sith.

R2 D4 - A small droid that looked a bit like a dirty dustbin on wheels, with red stripes, which was often sold, stolen or tampered with by other robots.
STAR WARS - Yes, that is true. R2 D4 was a cousin of R2 D2, kind of.

I.P. ON-U - A polite silver robot cousin of C3PO, who ended up being run over by Jabba the Hutt in his Sail Barge.
STAR WARSN'T - No, there was not an I Pee On You in the Star Wars films.

Mar Mar Binks - The mother of Jar Jar Binks, a floppy eared Gungan military officer who first made an appearance in Episode 1: The Phantom Menace.
STAR WARSN'T - We're not sure who Jar jar's mother is, but we know that he is one of the most annoying and hated movie characters in the world.

Darth Nihilus - A nasty, nasty man who survived by the Malchor V Battle and the Mandalorian Wars
STAR WARS - Yes, that is true, and Darth Nihilus even joined in with a rebellion on the planet of Onderon. He's a busy Sith Lord that one.

Count DooPoo - An evil Sith Lord who was once a Jedi apprentice of Yoda
STAR WARSN'T - Of course not, that was Count Dooku

Grand Moff Tarkin - An important character in the Clone Wars, who remained loyal to Chancellor Palpatine for many years, becoming a fleet commander.
STAR WARS Yes, that was true. Tarkin was not only incredibly powerful and arrogant, but he was a bit of a dope.

Greedo - A skilled bounty hunter with a green head, large eyes and plenty of attitude. He was an enemy of Han Solo and made an appearance in the Mos Eisley Cantina.
STAR WARS - Yes, Greedo was a male Rodian, a species known for their courage. He was proper ugly as well though.

IG-88 - An assassin droid that turned rogue and tried to exterminate all traces of biological life with its flame thrower and gas grenades, as well as its sonic stunner.
STAR WARS - Yes, and IG-88 even assisted Darth Vader on occasion.

Jacen Solo - The son of Han Solo, who trained as a Jedi knight and loved wildlife, especially cute and cuddly animals.
STAR WARS - Yes, that is true, and Jacen was the daughter of Princess Leia, famous for being one of the founders of the Rebel Alliance and for having doughnuts in her hair.

Hikaru Sulu - A brave character who was able to skillfully manoeuvre even the largest of space ships, effortlessly taking them into warp drive.
STAR WARSN'T - No, he was from Star Trek of course. He was played by George Takei, you know, the man who went into I'm A Celebrity in the Jungle and became friends with Joe Swash, singing the rude Ollie Ollie Ollie song about sitting on the grass.

Bingo Banjo - A famous bounty hunter and Mandalorian, who once destroyed a Death Watch tank.
STAR WARSN'T - No, that one is made up, you are probably thinking of Boba Fett, a clone of Jango Fett.

Cad Bane - A Durosian Bounty Hunter who was known for being ruthless and fearsome.
STAR WARS - Yes, that one is true, and Cad Bane rose to power following the death of Jango Fett in the Clone Wars.

Callista Ming - A sexy Jedi knight from the planet Chad, from the latter Galactic Republic era.
STAR WARS - True, she was a sneaky one though, because she was a member of a rouge sect of Jedis.

Captain Rex - A strong Clone Commander who dyed his hair blonde, so that he would be more individual
STAR WARS - Yep, that is one is true. He was the leader of the 501st legion if you will.

Darth Zombalgon - A Sith lord who lived around 1,000 years before the famous Rise of the Empire.
STAR WARSN'T - No, that one is false. That was Darth Bane, who wore a nice black hoodie all the time, probably because he was bald.

Dash Rendar - A Corellian mercenary who rescued Han Solo from naughty Boba Fett.
STAR WARS - Yes, that one is true. Dash Rendar often argues with Han Solo that his spaceship is much faster than the Millennium Falcon. Honestly, boys and their toys.

General Dodonna - A member of the Galactic Republic Army with a beard that made him look a little bit like an evil Santa Claus.
STAR WARS - Yes, that one is true, but you most certainly wouldn't want to sit on his knee and read out your Christmas list.

Kit Fisto - A funny looking man with green tentacles on his head and a lovely smile.
STAR WARS - Yes that is true, Kit did have a lovely, lovely smile. He was a Nautolan Jedi master as well.

Luminara Unduli - A female Jedi master from the planet Mirial, who loved to get tattoos.
STAR WARS - That one is true, yes, Luminara has lots of tattoos and was a close friend of Quinlan Vos.

Padme Amidala - The former Queen of Naboo and a much respected Republic senator, who loved to wear fancy clothes, including tight leggings and crop-tops to show off her belly button
STAR WARS - Yes, true. She was actually the wife of Anakin Skywalker (who later become Darth Vader), as well as being the mother of twins Luke Skywaker and Princess Leia. Spoiler alert. Oh, too late.

R2 Detour - A small droid that had a habit a getting lost and going down the wrong corridors, which often led it to danger.
STAR WARSN'T - No, that is just nonsense, there was no R2 Detour in the film, but there was an R2 D4 though.