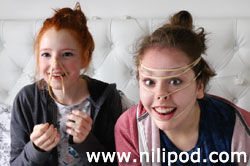 Instructions from the script:

After the excitement of the FeelyPOD last week, we thought that you might like to give it another go.

Only joking Liv - don't panic. You'll enjoy this one much, much more. This week it is more of a physical. It is a test of speed, dexterity and agility, and involves some flexible apparatus.

Basically, it is who can put the most elastic bands on their head in one minute, to make themselves look like an elastic band monster. It is called the 'Great Laggy Band Challenge'.

Playing the Elastic Bands on the Head Game YouTube Video

How to Play the Game

The bands have to be spread over your face and not just in one area, with at least one above your eyes, on your nose, above your mouth and on your chin. You can only put on one elastic band at a time. You have been provided with hair ties so that you can put your hair into pony tails.

You have a timer, and no need to toss the double-headed coin this week, as you are both going to do this challenge at the same time.

And remember, describe what you are doing for your listeners.