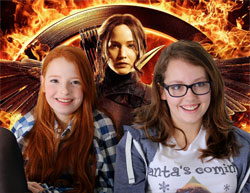 This week, because it is a Hunger Games special, we're going to blindfold you and keep force-feeding you with a giant spoon and a plastic funnel until you guess what you are eating.

So, you will have to eat up quickly, otherwise you will get full up and messy. Try not to choke.

No, only joking. We were going to do that, but we had an ever better idea. We've called it 'Hunger Games, Real or Not Real', like Peeta keeps saying in the film.

You each have an envelope and inside are some questions that you have to ask each other.

There is no timer, you simply have to decide if the questions are true or false, and then look at the answers. There are 15 questions in total, but are they Real or Not Real?

No need for a double-headed coin this week then.

Soft scoop vanilla ice cream was served to the cast every day on the set.
REAL, but not strawberry ice cream, because as we learnt on last week's podcast, it can attract aliens.

The rotating Cornucopia set in Catching Fire was so elaborate that it took more than 10 months to build.
NOT REAL. It was just 10 weeks.

Author of the Hunger Games, Suzanne Collins, came up with the story while flicking between TV channels, showing the Iraq War and a reality show.
REAL, but we don't know if it was the Great British Bake Off or Big Brother.

Fans like to refer to Peeta and Katniss together, by joining their names to make Pee-Niss.
REAL, and they also join Katniss and Peeta to make Kat-Pee.

One day on set, Jennifer Lawrence told fellow actor Josh Hutcherson (who played Peeta) that she could kick above his head, but she ended up kicking him in the face, giving him a concussion.
REAL, and she felt awful for kicking him.

When training for the first Hunger Games film, clumsy Jennifer Lawrence ran into a wall so hard that doctor's thought her spleen had burst.
REAL, but after getting a scan at the hospital, doctor's gave her the all clear and said she was very lucky.

If Jennifer Lawrence was stuck on a desert island, she would happily watch the Harry Potter films every day forever.
NOT REAL, but she would watch Bridget Jones's Diary every day.

Elizabeth Banks, the actress who played Effie Trinket, had such long fake fingernails on set that she needed someone to pass her toilet paper when she used the loo.
REAL, and she also needed an assistant to unzip her dress. Not sure how she managed with her underwear though.

The butterflies on Effie's stunning butterfly dress were actually made from 10,000 feathers that had been individually painted, one by one. It took weeks to complete.
REAL, and it was the actress Elizabeth Bank's favourite dress from all of the films.

Jennifer Lawrence went deaf in one ear when she caught an ear infection after diving into stagnant water in Catching Fire.
REAL, it lasted for a whole week.

Brooklyn Beckham's ex Chloe Moretz auditioned for the role of Katniss Everdeen.
REAL, and so did lovely Emma Roberts and many, many other actresses.

Liam Hemsworth, the actor who plays Gale Hawthorne, told his agents that if he didn't get offered the part of Gale, he would scream.
NOT REAL, but he did say he'd burn down his house though.

Josh Hutcherson, the actor who played Peeta made Jennifer Lawrence wet herself when he scared her by putting a model of Katniss on her toilet seat.
REAL, but she soon forgave him and pranked him back.

Jennifer Lawrence also auditioned to play Belle in the vampire epic Twilight.
REAL, but she obviously didn't get offered the part as she wasn't as pale as Kristen Stewart.

On the first film, there were 35 make-up artists and almost 500 different wigs.
REAL, and there were also close to 2,000 costumes.

Blackberries were used to simulate the deadly poisonous berries called 'nightlock'.
NOT REAL, it was actually frozen blueberries.

It took over three hours each day to transform Elizabeth Banks into her character Effie Trinket.
REAL, she was very patient and would sometimes fall asleep in the make-up chair.

When Jennifers Lawrence was offered the role of Katniss, she accepted it within five seconds.
NOT REAL, it took her three days to accept the role, as she was scared of how it would affect her career.

Liam Hemsworth, has a brother called Chris Hemsworth, who played Thor in the Marvel Comics superhero movie.
REAL, as he was really good.

The cast had to put money into a swear jar every time they used bad language in front of a child.
REAL, they had potty mouths.