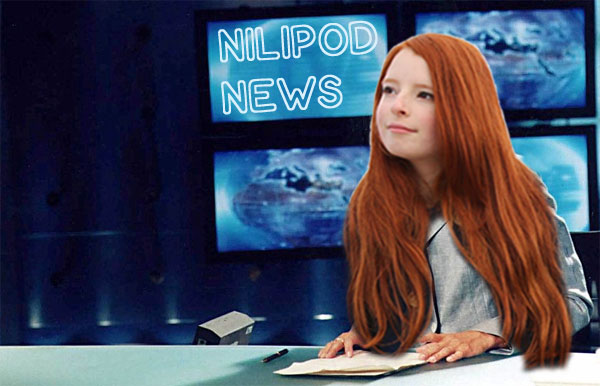 This is one of my favourite features, where I trawl through the week's newspapers and online news websites, looking for the most interesting headlines that I can write about.

I particularly like entertainment news and 'nice' gossip, keeping an eye out for things that I'd like to hear about myself. There is never a shortage of newsworthy articles and funny 'non-stories' to discuss, and so it is often a case of having too many for the website, so I try to choose only the very best to write and chat about.

News for 30 April 2016 - Stories include the Queen and Prince Harry messing around on camera, Justin Bieber shaving off all of his hair and surprising his fans, and Simon Cowell dressing up as Hannibal the Cannibal (off of The Silence of the Lambs).

News for 23 April 2016 - Stories include a possible PhotoShop fail for Victoria Beckham, the Queen joking with American tourists, Nadiya from the Great British Bake Off baking the Queen a wonky cake, Princess William playing with light sabers on Star Wars set, and Taylor Swift hugging Rihanna.

News for 9 April 2016 - Stories include a funny extract from a children's In the Night Garden book, news about Zoella becoming the sexiest woman in the world, Tom Hanks and his lost property service on Twitter, Justin Bieber's new deadlocks and the latest Harry Potter attraction in Hollywood.

News for 26 March 2016 - Stories include Zoella dying her hair grey, a Harry Styles lookalike on The Voice, people going mad about colouring-in pencils, festival tents made of cardboard, men with flowers in their beards, and the funniest boat name ever.

News for 20 February 2016 - Stories include the UK's biggest pop stars dominating the global charts, doggy IQ tests, Instagram mess-ups by Harry Styles and Zoella, Lady Gaga at the Super Bowl, Frozen the Musical, and an update on the new Star Wars VIII movie.

News for 13 February 2016 - Stories include Top Gear signs up Matt LeBlanc (Joey from friends) as Chris Evans' co-presenter, Katie Price gets her baby Bunny's ears pierced, Mary Berry swigs garlic beer, and the Queen is keeping it in the family, yet again.

News for 6 February 2016 - Stories include Justin Bieber taking fashion risks and getting a cute new puppy dog called Phillip, Harry Styles spending over £20 million on a trendy London flat, Louis Tomlinson's baby boy Freddie, and an update about the £33 million lottery winner - is she a fraud?!

News for 30 January 2016 - Stories include how JK Rowling once wrote graffiti in a hotel room, David Beckham being a strict parent, the real facts about the dreaded man flu, a big blunder in McDonald's, losing weight the Alan Sugar way, souping vs juicing, and the actual secret of happiness.

News for 23 January 2016 - Stories include Simon Cowell and his possible piles, Cadbury's Creme Eggs going down the pan, Prince William eating with schoolchildren, the Spice Girls getting back together again, X Factor suggestions from Dermot O'Leary, and Justin Bieber ditching his Lamborghini for a skateboard.

News for 16 January 2016 - Stories include Zoella's ghostwriter rumours, Phillip and Holly playing Pie Face, Adele singing karaoke, Davina McCall and her toilet problems, eating Christmas trees, Leonardo DiCaprio getting cosy with Rihanna, and the queen charging her birthday guests for the privilege of attending her party.

News for 2 January 2016 - Stories include Chris Evans not getting on very well with the new series of Top Gear, Louisa Johnson from the X Factor being a bit of a flop winner, Tom Daley cooking up a storm with a special frying pan, winter weather, the Facebook dog with ham on its head, and Alfie and Zoella pleading with fans for privacy.

News for 12 December 2015 - Stories include Simon Cowell and his burglary gaff, rumours about Hunger Games movie prequels, the possible resurrection of Top of the Pops, Nigella's weird cookery ideas, and hunky celebrity bodyguards.

News for 28 November 2015 - Stories include the Ed Sheeran and Courteney Cox marriage rumours being put to bed, the new designs for the next generation of Apple Watch, Alan Sugar and the Nokia phone saga, and Taylor Swift upsetting the bird-watching natives in New Zealand.

News for 21 November 2015 - Stories include Jennifer Lawrence falling over at a Hunger Games premiere (again), Nigella Lawson cooking burnt lettuce with fried eggs, Harry Styles being as quiet as a mouse on the X Factor, Simon Cowell's cute dogs, Justin Bieber and his Instagram photo with best-bud Jennifer Aniston, and a man eating lollipops through holes in his cheeks - gross.

News for 14 November 2015 - Stories include a number of Harry Potter themed newsworthy items, such as theft on the movie set of Fantastic Beasts and Where to Find Them, J. K. Rowling's new book rumours and scientists making actual invisibility cloaks.

News for 7 November 2015 - Stories include eating some banana skins, Mez Bez baking in the US, Ed Sheeran marrying Courteney Cox (what?), Apple iPhone 7 rumours, Michael Jackson still earning millions, Spike the dog and his porcupine face, and a hangover tattoo that went so wrong.

News for 31 October 2015 - Stories include sticky contact lenses, a daft deer with a pumpkin on its head, the prankster spider YouTube video, a 'sexy potato' Halloween costume, Channing Tatum as Winnie the Pooh, the 'Great British Pumpkin Shortage', albino Pumpkins and the Tesco zombies.

News for 24 October 2015 - Stories include Warwick Davis and his caravan, X Factor updates, the Marks and Spencers Christmas decorations outcry, Liam Payne and his thoughts on the new OneD album, Britney Spears zipper problems, regrowing teeth and the Weymouth shark.