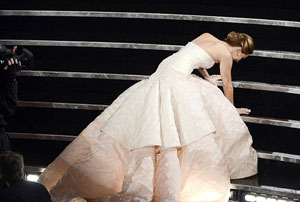 This week in Good News, we have a number of Hunger Games related stories mixed in with some general celebrity gossip.

Yes that is right Nia. This is the week that HUNGRY Americans finally started eating the humble haggis after their haggis ban was finally lifted.

And sausage rolls have also made an appearance in the United States, although Americans were said to be very confused by the concept of meat wrapped in pastry.

JENNIFER LAWRENCE FALLS OVER AGAIN
Clumsy Hunger Games star, Jennifer Lawrence, has fallen over yet again at a premiere of the Mockingjay Part 2 movie. Apparently she got her heel caught in her rather long Ralph Lauren gown. Known for being a bit of a clutz, Jennifer has previously tripped over twice at the Oscars, so people are getting used to her tumbles. Try a shorter dress Jennifer, or shorter heels, or both.

NIGELLA COOKS UP A STORM WITH SOME LETTUCE
Saucy TV chef Nigella has cooked up a storm this week with her ridiculously basic recipes. These have included burnt lettuce with a fried egg, and a slice of avocado on toast.

Looking forward to next week's show already, where we get to learn how to peel a banana. Only joking Nigella. I'm sure your burnt lettuce tasted lovely, although I prefer lettuce in a burger bun myself, with a burger.

WHAT EVER HAPPENED TO THE FLYING CAR ON HARRY POTTER?

Well, last week's Harry Potter special was such a success that we have a related story to include in this week's Hunger Games podcast. Have you ever wondered what happened to Ron Weasley's blue flying car from Harry Potter and the Chamber of Secrets?

The answer to that question is that Liam from One Direction bought it for more than £100,000. He keeps it parked in his back garden. Why?

HARRY STYLES IS QUIET AS A MOUSE
Fans of long haired Harry Styles , off of One Direction, have been extremely worried about the singer, as he was so quiet after the band played their latest single 'Perfect' on last week's X Factor. Asked about his silence, he just said that he couldn't be bothered to talk. Fair enough Harry.

MORE X FACTOR GOSSIP
There is so much more to talk about on the X Factor, so here is a very quick round-up. Olly Murs completely messed up announcing the next contestant to leave. The ratings are now so bad that even Countryfile is more popular than the X Factor.

Simon Cowell pretended that he wasn't bothered and posted a picture of him watching The Jungle Book with his 21-month old son Eric. He also posted a pictured of his cute little Yorkshire Terrier dogs, named Freddie, Squiddly and Diddly.

SO MUCH BIEBER
Justin Bieber can't seem to stay out of the news at the moment, what with his girly new blonde haircut and selfie of him with Jennifer Anisiton (you know, Rachel from friends). Who would have thought they were mates?!

He's also suddenly released 13 music videos for his new album 'Purpose', all at once, although Justin is only actually in two of them. Bit weird that.

HUNGRY MAN EATS LOLLIPOPS THROUGH HOLES IN HIS CHEEKS
Another Hunger Games story here, and a rather gross one at that. Joel Miggler from Germany is now the world-record holder for stretched body piercings.

He has such big holes in his cheeks, called flesh holes, that he is actually able to suck on a lollipop through his cheeks, without even opening his mouth.
[DESCRIBE PHOTO]

JUMANJI GAME MIGHT BE REAL
Have you ever watched the movie Jumanji with Robin Williams and wondered what it would be like if it came true? Well, archeologists have just discovered an ancient boardgame that is over 2,000 years old. They think it was called 'Liubo', but they are afraid to roll the ancient dice because they think it might be cursed.

And that was this week's Good News'.