So much going on this week. What with the new One Direction Single, Perfect, Back to the Future Day, and the teaser trailer for the forthcoming Star Wars movie 'The Force Awakens' being released and watched by millions around the globe, but where was Luke Skywalker?

WARWICK DAVIS CARAVAN UPDATE
Let's have an update on last week's story about Warwick Davis and his stolen caravan. Any idea if it has been found yet Nia?

More updates on that exciting story when they come into the studio. Moving on...

X FACTOR UPDATES FOR THE WEEK 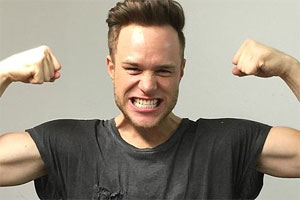 And on the X Factor this week, Simon Cowell critiqued one of the contestants, Anton Stephan, for pulling funny faces when he sang. He replied by pretty much saying that unlike Simon, he couldn't afford Botox.
Cheeky Anton.

And talking about the X Factor, lovable Olly Murs posted some before and after pictures of himself after 12 weeks of intensive fitness training. What do you think? Hot bod, or not really much difference? Actually, on a more serious note, we fully agree with Vin Diesel's comments this week that 'BODY SHAMING IS ALWAYS WRONG' Always. Olly, you look lovely whatever.
Nice rhino boxers as well. Apparently they cost £75.

And on the adverts to last week's X Factor there was a rather mysterious and unexpected advert, which was basically a black screen with the words 'Hello, it is me'. Well, it was Adele trying to hype her new album, which is probably going to be her last one ever when is it released on November 20th. Good idea to stop on a high note Adele, or a low note if you like.

MARKS AND SPENCER CHRISTMAS DECORATIONS
It is Christmas time already at Marks and Spencer, but the successful British retailer caused offence this week on its website, when it had pictures of its Christmas tree decoration letters in an unfortunate order, F, C and then a K. People were shocked, calling the store obscene and rude. A statement released by M&S apologized for any upset and blamed the blunder of a computer failure. Mmmmmm.

LIAM PAYNE'S ALBUM THOUGHTS
Star of One Direction and recently voted Attitude magazine's sexiest man of the year, Liam Payne talked about the band's upcoming album which is called 'Made in the A .M.' and simply said - 'If you don't like it, you can poo on it'.

Thanks for that Liam babes.

BRITNEY SPEARS AND HER ZIPPER 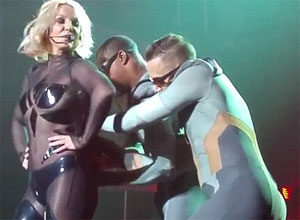 Ooops she did it again, well kind of. Britney Spears suffered an embarrASSing wardrobe malfunction this week, while performing at Planet Hollywood in Las Vegas. Her back zipper broke and split open, revealing her knick knacks, right in the middle of her hit song 1, 2, 3. She just carried on regardless. What a professional.

REGROWING TEETH
Boffin scientists have been working hard in their labs to extract stem cells from urine. They are confident that humans will one day soon be able to regrow any teeth that they lose, possibly meaning the end of fillings and dentures. Hooray for the boffins and their wee wee science.

WEYMOUTH SHARK
And talking of gnashers, did you hear about the 6 1/2 foot long shark that was caught of the coast on Devon this week, close to Weymouth. The grey porbeagle shark, a close relative of the vicious Great White, drew a crowd of stunned onlookers when it was dragged onto the beach.

But don't panic, this species of shark has only ever bitten a few humans and nobody ever died. Experts believe that many of these sharks are actually living off the coastline of Southern England.