Get your newsreader hat on now then Liv and shuffle your papers, cue the autocue, because it is time for Good News, with some Halloween news stories for added spookiness.

STICKY CONTACT LENSES
Worrying news, when a woman feared that she was going blind after putting in some novelty Halloween contact lenses, which became stuck and glued to her eyeballs. Can you imagine? What ever caused that to happen I wonder? Oh, well apparently she was in left agony after becoming drunk and leaving them in overnight. So, it sounds like it was her fault then, really. Don't drink and lense. 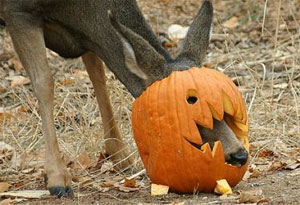 A dopey deer in America scared passersby after it got its head stuck in a pumpkin and walked around like a headless horseman deer thing. The local sheriff stepped in basically took the pumpkin off its head, after having a bit of a laugh. We're looking at a picture now. It is very cute. Describe it.

PRANKSTER SPIDER
A prankster terrified members of the public in California by basically dragging a big spider around on a piece of string, becoming a YouTube video sensation. I prefer the Dog Spider video - have you seen that? It is just so funny.

SEXY POTATO COSTUME
Comedy blogger Jeff Wysaski from Los Angeles had the world in fits this week, when he put up a poster of his wife dressed for Halloween, as a sexy potato? Don't really get it Jeff. Where is the humour.

BRAIN CAKE
Fancy a little brain food this year for All Hallow's Eve? Then you are in for a treat, because the latest food trend for October is a red velvet cake in the shape OF A BRAIN, with raspberry jam for blood. This is disgusting. I'd be sick if I ate that. Noooo thank you.

It is just wrong.

CHANNING TATUM AND HIS POOH
Hunky heartthrob actor Channing Tatum dressed as a poo for this years' Halloween, Winnie the Pooh that is, and pretty much looked ridiculous. He claims that his costume terrified all the children at his daughter's Spooky party, but I doubt that Channing. You just look a little silly really, but good effort. Seriously, he is ridiculously good looking though isn't he, Pooh or no Pooh. 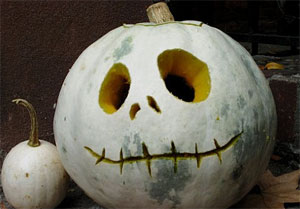 Ever want something a little different when it comes to getting your pumpkin for Halloween? Well, Morrisons are selling a ghostly looking white albino pumpkin this year, as something of a novelty. They're just £3 while stocks last, apparently. Which do you prefer?

PUMPKIN SHORTAGE
And on the subject of pumpkins, apparently they are in short supply this year due to wet weather. Could've fooled me! There is lots in Asda and Sainsburys. Anyway, people are being advised to carve out turnips instead. This October disaster is already being known by some people as 'The Great British Pumpkin Shortage' and we think that it will be remembered for at least... probably, five minutes.

TESCO ZOMBIES
At over at rival Tescos, children have been left in tears due to their extremely scary rubber Zombie Heads and pretend chopped off arms. They had to be removed from the checkout area (the Zombie heads, not the children) to prevent terrified traumatic toddler's tears and tiresome terrible tantrums.

That is easy for you to say.

Some parents were said to be fuming mad and one mother said that her two year old boy prefers Peppa Pig to flesh eating zombies with rats in their mouths. A good point well made I think, but they do look really cool though.

We should get one.

THOSE PESKY FALSE WIDOW SPIDERS ARE BACK
And those false widow spiders are back and making headline news once more, after biting a plumber on the back of his in London, who was bringing his washing in. His neck turned purple and a week later, the sore skin starting peeling off.

CORGI PUPPY
And now for the token cute story at the end of the news. A puppy named Bilbo played with a baby pumpkin this week, becoming yet another star of the You Tubes. The COGGY DOGGY basically barks a bit and pushed the pumpkin around the floor. Here's a clip that perfectly illustrates this story for our podcast listeners.

WARWICK DAVIS CARAVAN UPDATE
And finally, Liv, any news on whether or not Star Wars Ewok actor Warwick Davis has found his stolen caravan yet?

No news in yet Nia.

OK. Thanks for that. I have a feeling that this story is going to run and run.