As we mentioned earlier, Mary Berry's new Bake Off show in America has flopped. Perhaps she is missing Paul Hollywood. And grumpy Lady C is out of the jungle, but was she ever a celebrity in the first place though?

Mark Zuckerberg, founder of Facebook, is to give away most of his £30 billion fortune, following the birth of his daughter Max, and DIY superstore B&Q unveils a new design of Christmas tree, where half of it is fake, and the other side is real, to stop arguments apparently. Ridiculous. And breaking news now, Simon Cowell was burgled last night, big time. They took some pretty valuable stuff. 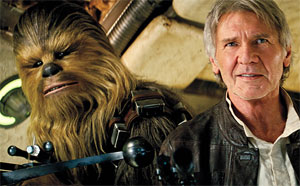 Talking about the new Star Wars films, Harrison Ford said that he thought his character Han Solo should actually have been killed off in Episode 6, Return of the Jedi. He has now admitted that he is glad Han Solo is still very much alive. Maybe that is because he's earning millions from starring in the new Star Wars movie, The Force Awakens. It is estimated that this epic movie will gross almost two billion dollars in the box office when it opens soon.

JEREMY CLARKSON AND THE FLYING AMAZON DRONE
Jeremy Clarkson, off of Top Gear, has always loved space ships and he has now got involved with Amazon's proposed Prime Air service, where a drone robot helicopter thing will deliver your package to your door, within hours. The drone is shown bringing Jezza a new football after his bulldog Stuart chews up his old one. Services could start as soon as next year, although we think it'll take much longer. Watch this space.

CHRISTMAS DINNER - EAT IN OR OUT 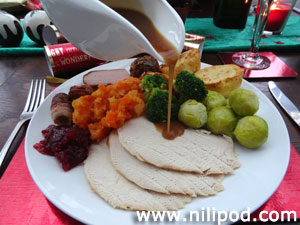 It looks like families are getting fed up with cooking Christmas dinner these days and a staggering number are now choosing to eat this meal at a restaurant on December 25th. Reservations are up by almost 50 percent this year, but it is just so expensive, with some charging over £50 per person. What do you think, eat in or eat out?

IPHONE HEADPHONE SOCKET SAGA
In an attempt to make the next iPhone even thinner, Apple are talking about removing the headphone jack socket altogether. Instead, a new type of Apple headphone will simply use the charging slot. We don't know whether you will have to buy yourself a whole new set of headphones though, or just an adaptor thingy. But will the phone become too bendy to put in your pocket? 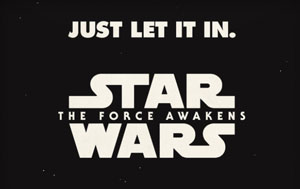 The new Star Wars posters have been released and they have a real retro vibe, with plain white letters against a space sky background. Less is certainly more. The excitement is building, nearly 40 years after the very first Star Wars film. It is amazing that the original cast is all still alive and reuniting once more - Harrison Ford, Mark Hamill and Carrie Fisher. New characters will include Kylo Ren, Mr. Merciless and Captain Phasma - the 'Gun Girl'.

HUNGER GAMES VS THE GOOD DINOSAUR
The wonderful Hunger Games Mockingjay Part 2 film is continuing to dominate the movies this week. It has beaten The Good Dinosaur and managed to stay at the number one spot. Good work J-Law, a.k.a. Katniss. So far it has grossed over half a billion dollars, and counting.

WRINKLY OLD DISNEY PRINCESSES
A Brazilian artists has recently drawn some pictures of what some of Disney's princesses would look like is they ever got old. The pictures include Arial, Cinderella, Snow White and Sleeping Beauty, showing them with wrinkles and grey hair. We're not quite sure what the point of this is, but they do certainly look old.

CARA DELEVINGNE HAS MADE OVER £8 MILLION
Famous model and star of one of our favourite films, Paper Towns, Cara Delevigne has reportedly made over £8 million in the past couple of years, with just a handful of very lucrative modeling contracts. These include brands such as Topshop, Burberry, Mulberry and also Chanel. What a lot of money Cara.