There are some heart-warming stories in the news this week, so we've got plenty to talk about and share with you. David Beckham has been talking about parenthood, and George Clooney's great big mansion looks like it might soon be flooded by the River Thames if there's any more rain.

We've discovered the secret of happiness, the facts about man flu, how Alan Sugar likes to lose weight, and how JK Rowling is actually a bit of a vandal deep down.

The Secret of Happiness
Newspapers have revealed what the secret of happiness is. If you're wondering, apparently it's as simple as choosing to be happy, ditching your grand plans, living in the moment and binning your bucket lists. Interesting ideas there.

Souping, Not Juicing
Juicing is very much 2015, the thing for 2016 is 'souping' - making soup that is. So get healthy and get souping.

Man Flu in Real Say Boffins
Man flu really is a real thing. Boffin scientists have found out that the flu virus often does tend to hit men harder than women, and this is all to do with the lack of estrogen in men. Tough luck there guys. 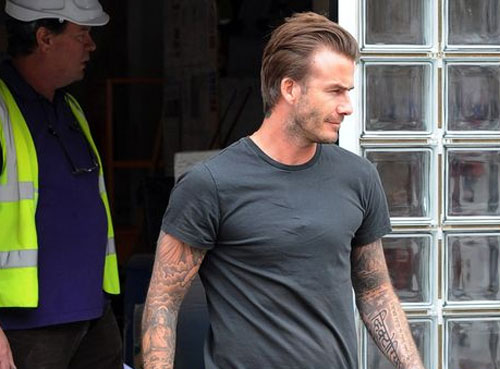 David Beckham has announced that he is going to be much stricter with his daughter Harper when she is old enough to start dating boys. She's only four years old though David, so there's plenty of time before all of that boyfriend nonsense comes along.

McDonald's Mishap
A woman bought a homeless man a Big Mac in McDonald's, after she spotted him eating tomato ketchup from the dispenser. It turns out that he wasn't homeless at all and was just hungry while waiting for his order. Yes, fast food isn't always that fast, in fact, it can be quite slow at times, can't it?!

George Clooney's Garden Might Flood
George Clooney's £10 million riverside mansion in Berkshire looks like it is in serious danger of being flooded, after the River Thames burst its banks at the bottom of his garden. Better get ready with the sandbags then George, just in case.

Want to Lose Weight? Use a Smaller Plate
University scientists have revealed that the easiest way to loose weight is by simply using a smaller plate. Lord Alan Sugar takes this one step further and recommends using a baby knife and fork as well, so that you eat less.

JK Rowling the Vandal
JK Rowling has told fans that when she finished writing her very last Harry Potter book, she celebrated by trashing her hotel room. She wrote some graffiti on an expensive bust in her room and quickly apologised to staff at the Balmoral Hotel in Scotland afterwards.

JK Rowling and her new Multi-Millon Yacht
And while we're talking about JK Rowling, did you know that she has just bought a rather lovely yacht that was once owned by Johnny Depp. It cost her £22 million and is called Amphitrite. And Angelina Jolie and Brad Pitt have holidayed on this boat in the past.