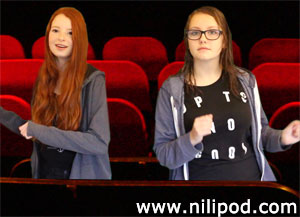 Every week or two, we like to take a look at what films are being screened at our local cinemas and make a decision about whether or not they might be worth seeing.

Most of the time, it is fair to say, that the latest movies all look a little dull, being a bit too serious, too violent, too 'grown up' and just not fun enough. We call this feature 'Girl's On Film', because that's exactly what we are and what we are doing.

If you have any movie reviews of your own, drop us an email or voice message and let us know.

Top Picks Coming Up in 2016 - We talk about the best films being screened in the cinema at the moment, as well as the best up-and-coming movies out soon, including Ghostbusters, Zoolander 2 and Dirty Grandpa, amongst many, many others.

Joe and Caspar Hit the Road - After watching this fantastic YouTuber movie on Amazon Prime, we tell you all about it and what to expect if you are lucky enough to see it for yourself.

Hunger Games Mockingjay Part 2 Reviews - We managed to see the premiere of the last Hunger Games film, which was amazing, but it is incredibly sad though now that it is all over.

James Bond Spectre Reviews - Talking about the latest installment of 007, with some funny tongue twisters and including a rough script translation of us chatting about this piece of cinematic history.

Movie Overviews from 10th October 2015 - Some of the latest releases, with basic plots for films such as The Scorch Trials, Everest, The Intern and The Martian.