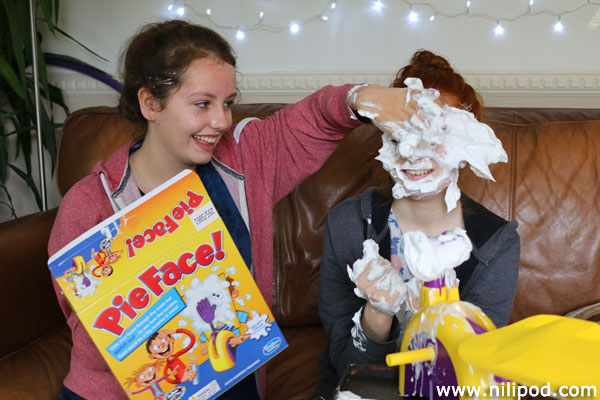 Playing Pie Face was epic and seriously good fun, although it was a little bit messy to say the least. It is made by Hasbro Gaming and is ridiculously popular at the moment, being sold out in many shops, with the price seeming to go up and up on Amazon.

We managed to get ours from Argos for the RRP of £19.99, which is really plenty of money, because after all, it is just a bit of plastic at the end of the day.

Pie Face is quite easy to put together, with the yellow handles fitting in the side, the purple chin rest at the front and the purple hand at the other side, although we were initially confused by the shape of the hand, because it does look like it should go the other way up. Anyway, we used spray cream to start with, which worked really well. We soon lost count of the scores - it's supposed to be the first one to reach 25 points by spinning the spinny spinner thing.

The more that we used Pie Face, the more we wanted to get our faces covered with cream, so we decided to improve the game, super-sizing the hand with some card taped on and then using shaving foam to form the custard pie. That worked a treat, as you can see by the photo. Of note, there is a video of us playing Pie Face, if you'd like to see just how messy we ended up getting, and how much spray cream we ate in the process. This is a silly, yummy game, although it is unlikely that we'll play it again for a very long time. We think that the catchphrase for the game should be 'Get a custard pie in your cakehole!'