NiliPod - All About Zoella / Zoe Sugg 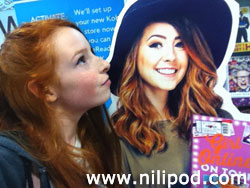 Zoella is without question one of our favourite YouTubers, vloggers and bloggers, not to mention novelists. We admire her honesty and down to earth attitude, and love watching her videos.

Her numerous YouTube videos have turned her into something of a massive celebrity in the UK, setting a number of rather extremely impressive records along the way.

She wrote (kind of) the best-selling first book for any UK author, with her story Girl Online (published by Penguin Books) selling almost 80,000 copies in its first week on the shelves. Her blog is actually award-winning and at the Radio 1 Teen Awards, she has won the 'Best British Vlogger' category, twice in fact.

Actually named Zoe Elizabeth Sugg, Zoella likes to make videos about a variety of different topics, ranging from make-up tips and hairstyles, to baking in her kitchen and chatting with fellow YouTubers, such as Tyler Oakley, Gabby (VelvetGhost), Joey Graceffa, Jim Chapman, Caspar Lee, Marcus Butler, Tannya Burr, Niomi Smart, and her best friend Louise Pentland (Sprinkle of Glitter). Zoella's boyfriend Alfie Deyes also often makes an appearance in her YouTube videos, along with her brother Joe Sugg, who is better known to his YouTube followers as 'ThatcherJoe', because he used to work as a roof thatcher.

The world of social media has now become something of a family affair for Zoella, as apart from her brother ThatcherJoe, both her mother and father regularly tweet under the names @TraceySugg and @DaddySugg. After leaving school in 2008, following her A-level exams (art, textiles and photography), Zoe Sugg found herself working in interior design, although she wasn't really happy in that job and so she started blogging about her life, writing about bargains that she'd found at car boot sales and local shops. Her videos soon followed with '60 Things in my Bedroom' in December 2009.

In 2011, she openly wrote about her panic attacks and general shyness, and her followers soon grew, seeming to appreciate her openness. Now, her YouTube channel, Instagram account and Twitter account have amassed a combined total of more than 20 million subscribers and followers, so there is no doubt that we're not the only people who like watching Zoella's videos.

Zoella often appears in the newspapers and because she has found success by talking in front of a camera, people seem to like to criticise her, without realising the amount of work that actually goes into filming and editing her videos, of which there are over 250 in her main YouTube channel (zoella280390 - a combination of her childhood nickname and her birthday), and many more in her MoreZoella channel.

She now lives in Brighton and we have recently enjoyed day trips and holidays here, when it was fun checking out some of the places that she has mentioned in her books, such as Choccywoccydoodah in The Lanes (an incredible chocolate shop, although an extremely expensive one). We even drove past her house, which is often described in the newspapers as being a beachfront mansion, even though it is actually about a 20-minute walk from Brighton's beach and just a very nice detached contemporary house.

These days, Zoe Sugg is not only a fashion and beauty blogger and vlogger, but she has launched a range of hugely successful beauty products. These are are officially named 'Zoella Beauty' and are currently sold in SuperDrug, where they often seem to end up in our shopping baskets. Funny that.