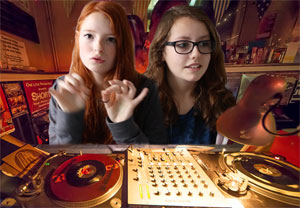 Listening to music is just the perfect way to pass time and we both enjoy playing songs while we do our homework, because it really helps us concentrate. We have a similar taste in music and love 'Panic at the Disco' at the moment, as well as many other groups and general chart music. Taylor Swift is amazing that's for sure, and we also really like Twenty One Pilots, Fall Out Boy and My Chemical Romance.

Anyway, on some of our shows, we have a feature that we like to call 'Chart Chat', which is where we pick a topical song and talk about it, reviewing the song in our own kind of way. This includes some of the funny and often rather ridiculous comments that people have posted against the actual official YouTube video - and believe it or not, these are all completely real.

Have you got a song that you really like at the moment and would like us to feature it on the next podcast? Then email in and tell us all about the song and the artist, with a clip to their YouTube video if they have one.

The following Chart Chat archives include extracts from our scripts and notes, as well as some videos of the artist / group performing the song.

Justin Bieber Purpose Tour - Justin Bieber is certainly flying high at the moment, topping the charts around the world, and now he's about to go on tour with his Purpose album.

Hello by Adele - She's back, with a really stunning ballad, but then her latest album has cost four million and involved some of the world's leading song writers, so you'd expect it to be pretty good really.

Writing's on the Wall by Sam Smith - Not everyone seems to like this song, but we do. It has a really classic Bond feeling, although Sam does sing rather high in places.

On My Mind by Ellie Goulding - This is an OK pop song that looks like it is performing well in the charts, and so we analyse the lyrics to find their true meaning, particularly the bit about tattoos.