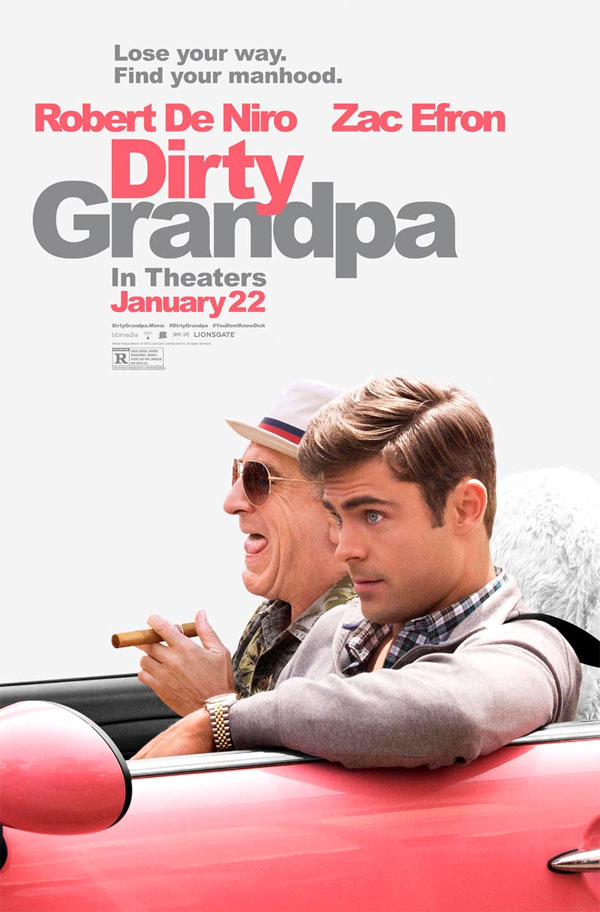 The premise for this rather zany comedy is that Robert De Niro (who plays army veteran Dick Kelly) has sadly just lost his wife of more than 40 years. At her funeral, he is reunited with his grandson Jason Kelly (played by hunky Zac Efron) and they end up going on a rather unexpected road trip together to Boca Raton in Florida, in a funny pink convertible car.

Much of the comedy in this film is a mixture of visual gags and extremely lame one-liners delivered by the 'Dirty Grandpa' himself. In fact, I've never seen Robert De Niro being quite so rude and crude in any of his films, and the rather out-of-the-blue shock factor swearing often falls a little bit flat at times.

The overall story is a fairly happy one, about an elderly grandfather spending time with his grown-up grandson, who is about to get married to a girl that Dick Kelly thinks is completely unsuitable and boring. She's a bit like this film really, dull and not worth bothering with, unless you are desperate for something to keep you occupied!

Directed by - Dan Mazer
Produced by - Barry Josephson, Bill Block, Jason Barrett and Michael Simkin
Written by - John M. Philips
Main actors - Robert De Niro, Zac Efron, Aubrey Plaza, Dermot Mulroney, Julianne Hough and Zoey Deutch
Running time - 102 minutes
Budget - US$11.5 million (approximately)
Nili Rating: 2 out of 5 - A poor attempt at a comedy, despite featuring two massive Hollywood stars in the leading roles. It could have been so much better if it was just a bit nicer.