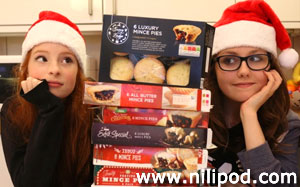 We've heard on the news that Harrods mince pies are the best in the country, but unfortunately we don't live in London and don't really think that spending nearly £9 for six pies is good value for money, whatever they taste like.

So, we thought we'd carry out our very own blind taste testing, where we bought an assortment of mince pies from all of the main supermarkets and shops, and then tasted them, scoring them for appearance, flavour, amount of filling, pastry, texture and overall yumminess. The results were surprising to say the least.

The Supermarket Brands We Tasted and Tested

The pies that we tested in this extremely 'scientific' manner were:


We were surprised at... 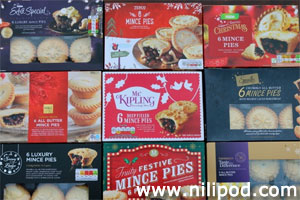 The different prices:
Asda extra special mince pies were £1.25, whereas Sainsbury's Taste the Difference were £2.50 - twice as much.

The labeling was not consistent:
Not all boxes had standard labeling on the front, including Marks and Spencers, which is covered in foreign writing on the back.

The different sizes:
Most were around 60 grams, although some of the boxes didn't even say the size / weight of the pies, anywhere.

Amount of sugar:
The Sainsbury's 'Taste the Difference' mince pies contained a staggering six teaspoons of sugar - per pie, whereas Morrisons had much less, almost half in fact - just 3 1/2 teaspoons of sugar.

Lidls mince pies were easily the best. They looked nice and they tasted fabulous. Our other favourites included Asda, Morrisons, and Marks and Spencer.

At the very bottom of the pile were Sainsbury's Taste the Difference. We didn't like these at all. Not only were they the most expensive by a long way, but they were so heavily spiced that they left a very unpleasant taste in our mouths afterwards. They certainly weren't for us, but let us know what you think. Happy eating.