Yes, it is a countdown to Christmas and we've searched out some really nice feel-good stories in the news this week. 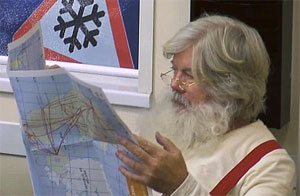 A group of unsuspecting young children got the surprise of their life when they ended up at Kwik-Fit for car repairs. At first they were very disappointed not to be going to the cinema, as promised, but that soon changed when they spotted Santa's sleigh being repaired in the corner of the garage, with actual Santa Claus sat nearby reading his newspaper while he waited. Even his reindeer were there. Of course, it was presents all round and great publicity for Kwik-Fit, which was the whole idea really.

MAGICAL MINCE PIES
Now, do you like to make your own mince pies, or do you prefer to buy them, because you can't really be bothered?! A consumer group recently did a blind test of mince pies from various supermarkets and shops, and guess who came first? Of course, it was the Harrods department store in London. They sell six mince pies for £8.95. Blimey, that is expensive. But don't worry, if that is too expensive for you, Lidls came a very close second and they are only £1.49. Tesco's Finest were last, so I won't be buying them.

Actually, after the podcast, we're going to test mince pies ourselves from eight different shops and supermarkets for a new YouTube video. We'll let you know the results on the podcast next week. The things that we do for the NiliPOD! 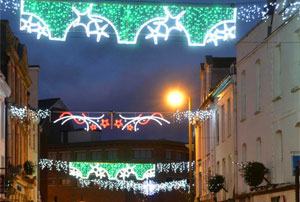 The Christmas lights in the small town of Tiverton in Devon are literally pants this year. Yes, they actually look like pairs of pants, strung across the streets, and apparently they cost £15,000. Sounds like a bit of a blunder, although at least its given Tiverton lots of publicity this Christmas.

WHO'S BEEN NAUGHTY OR NICE THIS YEAR?
A recent survey by 'School Stickers' involving more than 10,000 children has found out that if your name is Harry, Ryan, Bethany or Anna, then you are most likely to be at the very top of Santa's 'Nice List'. However, bad luck if you are called Joe, Chloe, Holly or Olivia, because chances are that you will be on the 'Naughty List', so you can expect a lump or two of coal in your stocking.