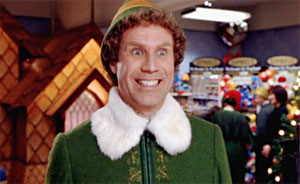 There is possibly nothing better in the world than sitting in front of a warm fire, on a cold winter's evening, watching a Christmas film.

But which one do you choose? There are so many now, and so many different ways to watch them.

So we've done a huge amount of research this week, asking all of our friends and family what their favourite Christmas films are, and we've managed to compile a list of ten amazing movies. And this is dead serious, no mucking about with this one.

And I bet that you've never even heard of the number one film, and it is incredible.

So, at number 10 it is:
A Miracle on 34th Street
There is two versions of this film, but we prefer the one with Richard Attenborough, off of Jurassic Park. Basically, the real Kris Kringle becomes the Santa Claus for Macy's department store in New York.

And at number 9 its:
Arthur Christmas
This is a lovely animation that came out in 2011. It is about Santa's clumsy son who helps the elves get the presents ready in the computerised Christmas command centre.

Number 8, ooh I love this one. It is:
Elf, with Will Ferrell
Yes, this is a brilliant family film. Buddy the elf grows up in the North Pole, but when he finds out that he's not actually an elf at all, he heads to New York City, with hilarious consequences.

At number 7, Hugh Grant stars in:
Love Actually
Yes, along with a whole host of other stars, including Liam Neeson, Alan Rickman, Keira Knightley, Emma Thompson and lovely Colin Firth, not to mention Rowan Atkinson and Bill Nighy. This is a really funny film with some touching moments, but it is a 15 certificate, because it is a bit sweary.

Just outside the top five, at number 6 it is that classic:
A Muppet Christmas Carol
The muppets get together with Michael Caine to re-tell this Charles Dickens classic for young children. If you are a bit older, you might like Jim Carrey's CGI animation film that came out a few years ago.

So, we're into the top 5 now, and at our number 5, its:
The Santa Clause
This one stars Tim Allen, who accidentally kills Santa in a comedy way and ends up becoming the next Santa Claus. And if you love this movie as much as we do, then you can also watch the sequels called: The Mrs Clause and The Escape Clause, with nasty Jack Frost.

It is getting exciting now. At number four we've got:
It is a Wonderful Life
This is a classic black and white fantasy movie that is all about a man who wants to kill himself, that is until Clarence the Angel pops down from Heaven and saves him.

So what do you think is at number 3. Well, it is:
Nativity
This British Christmas comedy is just brilliant. It stars Martin Freeman, a useless primary school teacher who has to put on the school's annual nativity play. Mr Poppy is one of my favourite characters in this. And again, there are two sequels: Nativity 2: Danger in the Manger, and Nativity 3: Dude Where is My Donkey.

Number 2 now. Get ready for it. So it is:
Home Alone
When a very cute and young Macaulay Culkin is accidentally left at home over Christmas and has to protect the house against burglars. This film was so successful that it inspired the recent James Bond film, Skyfall, possibly. And yet again, there are some sequels. Home Alone 2 is lovely, but 3 and 4 get progressively worse.

So, at the top spot, our number one best ever Christmas film, it is:
Rare Exports: A Christmas Tale
If you've never seen this one, you must look out for it, because it is just so incredible and completely gripping. It is described as a horror fantasy film and is set in Norway. Santa Claus does not seem to like naughty children and neither do his elves. That is all we're saying.

We're going to put this list on our website, along with some others, including some mushie films made by Hallmark with the wonderful Candace Cameron Bure. So look out for them. Oh, here they are now...

Other Christmas Films Worth a Mention