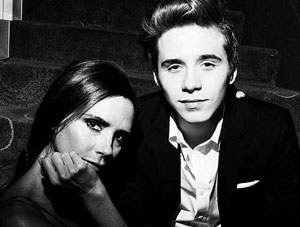 This is the first week in history that Brooklyn's hardly been in the newspapers at all, apart from all the fuss about him joking that he should be the sexiest man in the world, rather than his dad, David Beckham. There were SO many articles about that.

The main story that has just broken in the news yesterday is that Brooklyn posted a lovely message to his mum, Victoria, better known as Posh Spice. Brooks showed the world that he really is the sweetest son ever.

The 16-year-old heartthrob posted a picture on his Instagram account, showing him smiling next to his mum. It was in black and white of course, as they always are. I don't think he can afford a colour camera.

And next to the photo, he posted a single heart emoji, to show how much he loves his mum. Fans went crazy, with comments including 'This is too cute' and 'Adorable'.

The boy with the quiff can't seem to put a foot wrong at the moment.