Well, what is Boy Wonder Brooklyn Beckham been up to this week? Not quite as much as normal, but he's still made some rather pointless headline news, and so has his family

His sister Harper was spotted yawning after meeting Prince Harry, and daddy David was announced by People's magazine as being the 'sexiest man alive'. Big shoes to follow in Brooklyn. 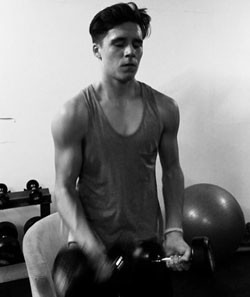 Anyway, back to Brooks. This week the teenage heartthrob has been on a New York shopping spree for new trainers with his mum, Posh. And he was wearing his Adidas cap again.

Hope you wash it Brooks, you never seem to take it off.

Brooklyn also joined his dad David Beckham for a charity soccer game in the Old Trafford stadium in Manchester, although the pitch was rather soggy and muddy. They both had number 7 on the back of their shirts, much to the delight of their cheering fans.

And, oh my goodness, who do you think has taken a weightlifting selfie this week and posted it on his Instagram account, with the simple caption - 'Working Out.

And he's thrilled to have finally reached 5 million followers on Instagram. We've got 26 now and we're thrilled as well.