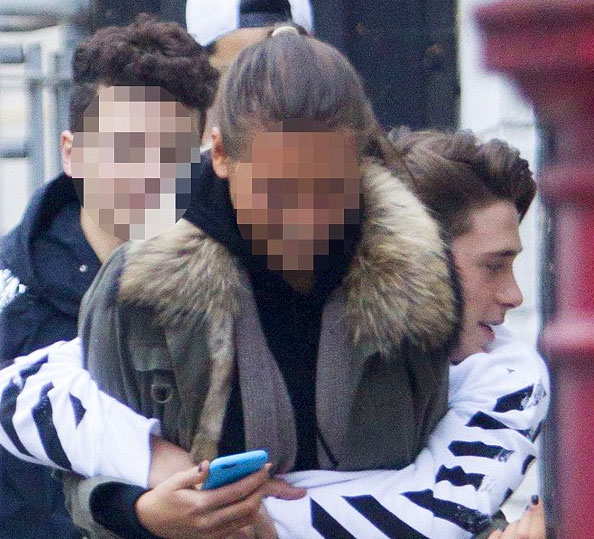 Well, Brooklyn is back from his tropical holiday break with the Gordon Ramsay gang and after the nation has been trying to guess where those great wakeboarding photos were taken, the Beckhams have finally revealed that they all went to the sunny Maldives. Almost as nice as Lyme Regis, but not quite as good for fossil hunting though, Golden Boards.

Brooklyn Beckham is rarely out of the papers these days. He has been spotted hugging a girl by an old-fashioned red postbox on a street in London, in the Primrose Hill area. They were papped by the press, although the girl in question had her face pixelated due to privacy laws. All that we could see on the blurry photo was that she had a nice ponytail.

Cute teen Brooklyn was dressed down in a casual designer white and black sweatshirt - made by Off-White. He was also seen talking to a friend through the window of his sporty Mini Cooper car, while the mystery ponytail beauty stood in the background and patiently waited.

The teen wannabe model has been seen out and about with hair like Justin Bieber's, where it is floppy on one side. Channing Tatum also has a similar hairstyle now. We're not keen lads and we really did prefer your hair how it was, but we were delighted to see Brooklyn wearing his stripy yellow and black bumblebee top again. It's been quite a while since we've seen that distinctive vest top, Brooks.