What's cookin' good lookin' Brooklyn? It is time for some of this week's 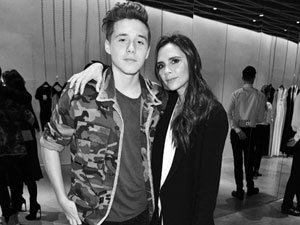 Brooklyn has been spotted wearing a sweatshirt this week. It was black to match with trademark Adidas cap, and it said three words 'I Feel Love'. He was papped at JFK Airport in New York, after jetting in with his mum Posh.

The boy wonder is keen to reach five million followers on his Instagram account, as he's currently at 4.9 million. We've got 24 followers now, so we're a bit behind him. We follow him and love all of his arty black and white pictures. His advice to budding photographers is 'ditch the selfie stick and go easy on the filters'. Great advice there. Thanks Brooks.

Victoria Beckham was spotted out with her eldest son this week at the Glamour Women of the Year Awards, held in Manhattan New York. Brooklyn cut a dapper figure in his smart suit at the red carpet event, and Posh even managed to crack a smile, which is very unusual for her. Newspapers described his haircut as being 'voluminous'.

And finally, guess who was spotted on his skateboard this week, trying out a tricky half-pipe. Yes, of course it was:

Not quite sure what a half-pipe actually is, but it sounds just wonderful. Magic stuff there for this segment of our Harry Potter special. Well done Brooklyn, the boy wonder, even though you are not actually a wizard.