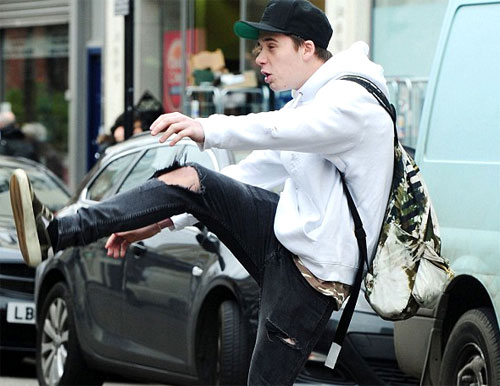 Brooklyn Beckham has been spotted out and about in North London, wearing a white hoodie top and a pair of black skinny jeans, and his trademark Adidas cap of course.

And the big news stoy that made the newspaper headlines when when Brooklyn kicked a coin into the air, showing off his outstanding soccer skills. It was quite impressive, but basically it was just a teenager, walking down the road and kicking a coin, but he was obviously being followed by a photographer who thought that this would make a great story to share with the world.

He was wearing a rucksack on his back and if you are like us and wondering what inside his bag, then check out Brooklyn's Instagram, because he has posted a picture of its contents. It is in black and white of course, because he says that 'sometimes, colour is all too real'. We hear what you are saying Brooklyn, like can be very real at times too, and so can the NiliPOD.

Also on his Instagram account is an amazing video showing Brooklyn kicking a football into a basketball hoop from a very long way away. Nice work Brooks.