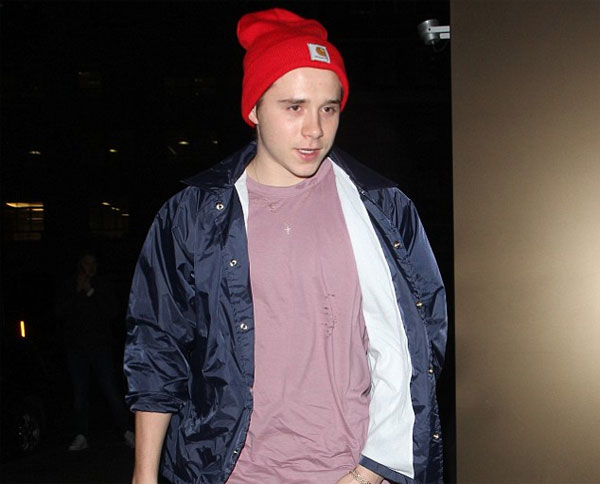 Once again, as per usual, Brooklyn Beckham has enjoyed a busy week of being a 17-year-old socialite boy, hanging out with his friends and enjoying the celebrity lifestyle as best he can.

Brooks started the week off by posting another black and white selfie photograph on his popular Instagram account, thanking everyone for making his birthday so special. His picture showed a big bunch of flowers in the background, which included roses, but whether or not they were romantic red roses from his girlfriend or yellow roses from his mum Victoria is unclear, because the photo was black and white of course!

Later on in the week, Brooklyn was spotted with his doting father David Beckham, supporting his dad at a UNICEF charity gala in the Phillips Gallery, London. However, Golden Boards certainly seemed to dress down for the occasion, wearing nothing more than some skinny black jeans, a pink / lilac LMDN T-shirt and a blue jacket, topping of his casual outfit with a bright red beanie hat. Brooklyn Beckham was also wearing a dirty looking pair of white plimsolls and a silver chain around his neck, with a small crucifix cross hanging down from the chain.

Finally, the other big story relating to the handsome Beckham boy concerns another photo posted to his Instagram account, with shows him celebrating his grandmother's birthday (Jackie Adams, mother of Victoria). The photo shows Brooks and his grandmother next to a cake shaped like a koi carp, with a row of candles along its back fin. Brooklyn captioned the black and white photo with just a few simple words - 'Special night with my nana'. Aw, bless.