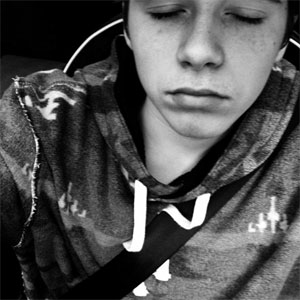 This week Brooklyn's had to put up with lots of teasing from his fans, thanks to his dishy dad David Beckham.

Brooks posted another black and white selfie of himself on his Instagram account. He was sleeping in a big cosy-looking Mexican style jumper. All was going well and he was getting thousands of likes, and then all of a sudden in the middle of the comments, David Beckham wrote 'That is my jumper'.

And then the world literally went crazy with excitement, all because Brooklyn took a picture of himself wearing one of his dad's jumpers, and his dad found out and embarrassed him.

Brooklyn has earned himself a new nickname this week - Golden Boards, because of his incredible skateboarding skills. He is getting better and better with his tricks and stunts. There is some videos of Brooklyn skateboarding on his Instagram account, including one in slow motion. Fancy!

We should also mention his lovely little sister Harper, as Victoria posted a picture of Harper this week dressed as a ballerina. It was a black and white photo, so she's obviously influenced by Brooklyn's style of photography, although he's started to post a few colour photos at the moment. Shock horror!

And that is the end of this week's news.